DuPage County,
On Wednesday, we delivered 100,000 petition signatures against government spying on Americans to Senate offices.
Senator Lindsey Graham’s (R-SC) staff responded by repeatedly yelling, “We don’t allow filming in the front office!” We responded, “We don’t like having our phone records spied on.”
Sen. Graham has made some of the most outrageous comments in favor of government surveillance. We made sure that he heard from the people.
Watch the amazing video of the delivery, and add your voice to the growing number of Americans calling for accountability. 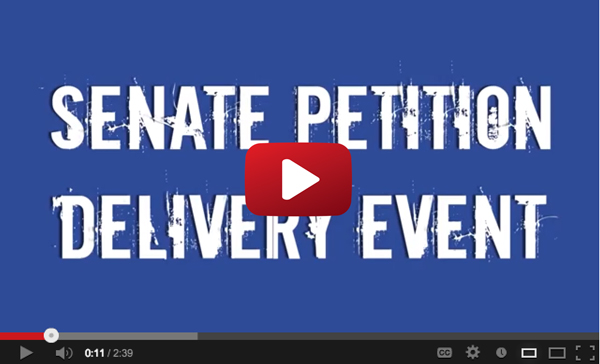 The media is taking note of our momentum. The Washington Post reported our “20,000 signatures in 36 hours” and MSNBC reported “100,000 Americans demanded that Congress investigate this NSA program.”
We’ll keep the media and Congress informed of the growing number of Americans demanding action.
Click here to watch the video and sign the petition today!
Thanks for being a bold progressive.
— Zaid Jilani, PCCC Investigative Blogger

PHOTOS FROM THE EVENT:

Like the PCCC on Facebook and follow us on Twitter.
Want to support our work? PCCC’s Draft Warren campaign was named The Nation’s “Most Valuable Campaign of 2011” and in 2010 we were awarded “Most Valuable Online Organizing”. And our tiny staff ensures that small contributions go a long way. Chip in $3 here.

Paid for by the Progressive Change Campaign Committee PAC (www.BoldProgressives.org) and not authorized by any candidate or candidate’s committee. Contributions to the PCCC are not deductible as charitable contributions for federal income tax purposes.